WHY CAN CONGRESS ALWAYS UNITE AND QUICKLY AGREE ON GIFTING MONEY TO ISRAEL BUT NOT DO THE SAME FOR IT’S VERY OWN CITIZENS ?!

I find it very funny that congress, on both sides of the political spectrum, republicans and democrats, always stand united when it comes to giving Israel’s what it wants. Never, ever do they take more than a second’s thought to vote yes when it comes to giving Israel it’s foreign aid and whatever else it wants. Yet when it comes to helping it’s very own citizens, a great example being the current coronavirus relief package, Congress is dragging it’s feet on releasing the funds so many unemployed Americans are in desperate need of right now as a consequence of the coronahoax shutdown.

What does this say? I think it’s clear, at least to me, that politicians in America on both the left and right take more seriously serving the interests of their jewish donors than that of their constituents. Former US congresswoman Cynthia McKinney says the same thing. For her not wanting to be a puppet of Jews, she was bamboozled out of congress by the Israel lobby.

And here is another question that needs to be made so people understand the big picture here…Why is it that the same government, both the democrat and republican party, that has over the last 20 years allowed trillions upon trillions of dollars to be wasted on endless wars in the middle-east and that has gifted hundreds of billions in bailouts to banks, is having such a long and hard time agreeing on to give it’s citizens only a measly $1200 in relief funds which many Americans STILL HAVE NOT EVEN RECEIVED YET!? Simple. The government gave up it’s power to create money back in 1913 to evil jewish bankers who hate and want to destroy America. In our current nightmarish jewish paradigm, the government, instead of simply issuing it’s own interest-free money to finance a stable and healthy society for it’s citizens, is instead always borrowing loans from the (((federal reserve))) to finance (at interest)  all sorts of globalist projects that only benefit the jewish run central banking cartel and it’s multinational corporations all over the world.

Not one politician has the guts to put through a piece of legislation that will actually help the white working class Christian majority because they are just puppets of the jewish central bankers who print their paychecks. That’s why all the politicians get such a FAT PAYCHECK while we are all just scraping by.

It is a reward for going along with the Satanist-Jewish agenda to destroy the goyim. But there was a rare exception. Jim Traficant.

Ohio Congressman Jim Traficant, was one of the very few politicians in recent times who sincerely cared about America. For trying to protect America from the vile scum that is Globalist Jewry, it’s tool, the FBI, at the time under the direction of the Zionist-Mossad agent Michael Chertoff, was able to maneuver Traficant in prison and convicted on bogus corruption charges. But once released after surviving almost 10 long years in prison, Traficant continued publicly talking about Israel’s control over America all over television and was even considering another election run at congress, so he had to be put down.

The ‘official story’ is that Traficant died in a ‘tractor acident‘. Yeah, right lol. I actually had the privilege of speaking to Mr.Traficant’s niece at a bar in a bar one night in Youngstown, Ohio and she personally confirmed to me that she believed her uncle was murdered.  But that is what happens to any politician who has the courage to go against globalist jewry, they will be targeted for character assassination and set-up on bogus bogus charges that lead to prison time or murder if the first option doesn’t work. I will be publishing another more in-depth article sometime this month about Traficant, so stay tuned for that!

In other interesting news, the old plastic surgery loving whore that is Nancy Pelosi did a interview on CBS’s the late late show with it’s host James Cordan, who looks like to me a flaming creepy homosexual pervert. In this interview without realizing it, she let out to everyone watching what great wealth and luxury she has. Jimmy Dore, a more old-school type liberal who I actually like, did a great expose on this. Give it a watch..

Her two refrigerators together cost $24,000 for her specialty chocolate ice creams, but she hates the small business owners of America. “Let them eat cake.” https://t.co/6ogIDP4QzT

Apparently, standing behind her were two massive refrigerators that go for $24,000 a piece ! Obviously, she’s been rewarded by globalist jewry for selling out the country to them. It’s soulless traitors like her in both parties that need brought to trial for treason and imprisoned for life.

“I have said to people when they ask me if this Capitol crumbled to the ground, the one thing that would remain is our commitment to our aid…and I don’t even call it aid…our cooperation with Israel. That’s fundamental to who we are.” – Nancy Pelosi 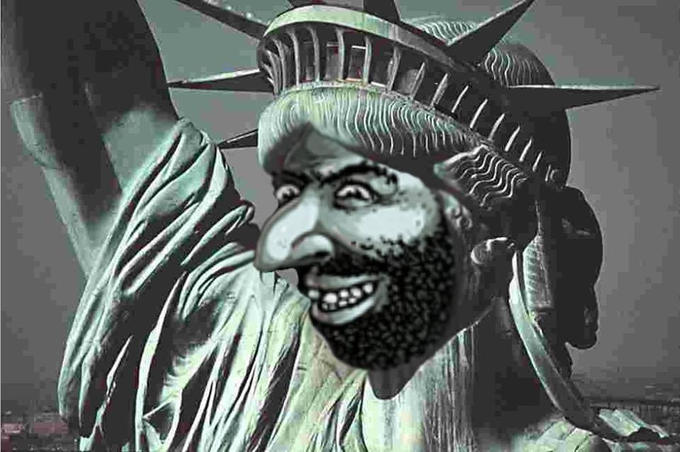 This article will be updated with more info and new memes later tonight…In a rush now. God bless you all