In the Midst of Total Economic Collapse, US Government Vows to Continue Sending Billions to Israel

At least as our economy collapses around us and we march toward majority unemployment with no possible way to fix any of it and no one even talking about a plan to try and fix any of it, our politicians are remembering the thing that matters most to the American people: sending free money to the Middle East.

Mike Pompeo might be a subversive agent of a foreign government undermining our security, our economy and our entire moral framework, but hey, at least he looks good while doing it. You gotta give him that.

With the US economy reeling from the effects of the coronavirus pandemic, the Senate Foreign Relations Committee agreed to give Israel a minimum of $3.8 billion in military aid per year. A full vote on the gift is expected soon.

The US unemployment rate now stands at 14.7 percent, the worst figure since records began. Nearly 39 million Americans have lost their jobs since the coronavirus reached US shores in late January, and the Congressional Budget Office warned on Tuesday that the US economy won’t recover from its current contraction until after next year. Moreover, the federal government’s financial relief packages to date have pushed national debt past a record $25 trillion.

You wouldn’t think there was anything wrong if you asked Senator Marco Rubio though. The Florida Republican and his colleagues on the Senate Foreign Relations Committee quietly approved a bill on Thursday to guarantee Israel a minimum of $38 billion in military aid over the next ten years, despite the economic shambles at home.

Passed unanimously, the bill now heads to the Senate floor for a full vote.

Though authored by Rubio – a Republican of hawkish persuasion – the bill aims to legally codify a promise made by former President Barack Obama in 2016. Under the terms agreed to by Obama and Israeli Prime Minister Benjamin Netanyahu, the Jewish state would not seek any additional funds beyond the annual $3.8 billion. Indeed, when Congress voted on an earlier version of Rubio’s bill in 2018, that figure was set as a cap. The 2018 bill was eventually rolled into another Middle East security bill the following year, which was left to die in the Democrat-controlled House.

Now, with Rubio once again pushing the bill, the spending cap has been removed. In the version passed by the Foreign Relations Committee on Thursday, the US will send “not less than” $3.3 billion in direct military aid and $500 million in funding for missile defense programs every year for the next decade.

Rubio boasted on Thursday that the bill “strengthens our nation’s strategic security alliance with Israel, a vibrant democracy that faces growing and unprecedented threats to its security and stability.” Yet the bill was passed with no fanfare, and in a state of near-secrecy.

Yes, at first I was like, “look, we might be looking at starvation in this country, maybe we shouldn’t be sending billions in free money to a hostile foreign country.” But then the Cuban homosexual Marco Rubio reminded me that because the racially segregated state of Israel is a “vibrant democracy,” it is important that we strengthen our alliance with them by giving them more free money, and so I was like, “yeah Marco, you’re right. Israel may be an enemy country that spies on us, steals from us and infiltrates our government to use our military for their own purposes, while doing absolutely nothing good for us ever, but given how vibrant their democracy is, they deserve free money from me, my family and everyone else I care about. If we all starve, then I guess that’s just the price we have to pay for increasing vibrancy around the globe.”

We must never forget that our most important duty as Americans is to care for the people of Israel.

also in the news – 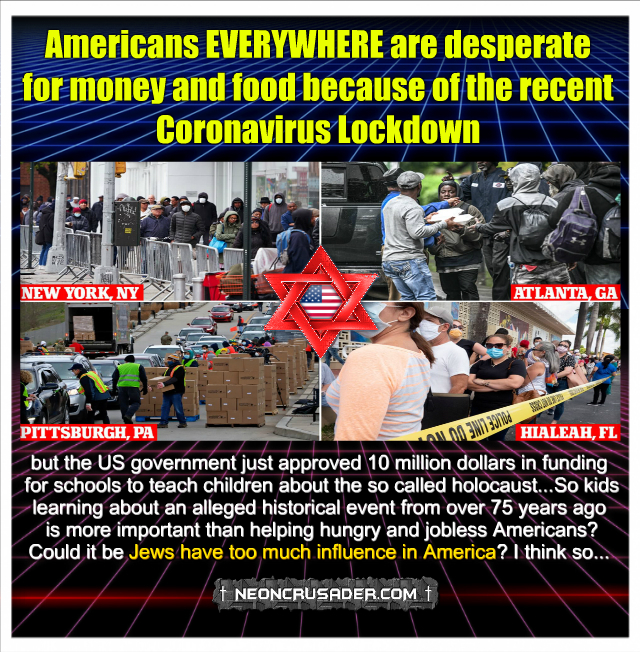 Americans EVERYWHERE are desperate for money and food because of the recent Coronahoax Lockdown,but the US government just approved 10 million dollars in funding for schools to teach children about the so called holocaust…So kids learning about an alleged historical event from over 75 years ago is more important than helping hungry and jobless Americans? Could it be Jews have too much influence in America? I think so…

mass perception programming of the jew as the eternal victim into the minds of the goyim is necessary for the jew to maintain his power over the goyim.

Leading lobbying for passage were Hadassah and the Jewish Federations of North America. (had jfk and rfk not been killed by the mossad, these jewish groups would all be powerless ad correctly registered as foreign agents.

In picture – Sen. (((Jacky Rosen))), the lead Senate sponsor on the $10 million Holocaust education funding bill. She looks demonic and reminds me of the evil nanny from the movie, ‘The Omen‘.

The vote Wednesday approving the Never Again Education Act, coming after overwhelming approval for the same bill in the House of Representatives in January, sends the bill to President Donald Trump, who is expected to enact it.

The money will be administered over five years by the U.S. Holocaust Memorial Museum, which will disseminate curriculum materials in part through a centralized website.

“Passing this bill by unanimous consent today sends a strong message that the Congress is overwhelmingly united in combatting anti-Semitism and hate through education,” Rep. Carolyn Maloney, D-N.Y., the lead House sponsor, said in a statement.

Sen. Jacky Rosen, D-Nev., the lead Senate sponsor, who is Jewish, said in the same statement, “The best way to prevent an atrocity like the Holocaust from occurring again is through education.”

Leading lobbying for passage were Hadassah and the Jewish Federations of North America.

Hadassah, noting reports of spikes in anti-Semitism attacks in the United States, said in a statement that the “stakes are so high for communities across America.”