The panic called corona is all dressed up in a pre-packaged spook show.

And in kosher approved JewTube, the arrow is coded with corona commotion to shake you to the bone.

I mean just type in ‘Bill Gates’ and presto!

Reams of ‘vaccine videos’ stampede up and down your computer screen.

He’s a geek with a PC persona who preens himself as the Queen of Corona. [Clip]

[”For the world at large normalcy only returns when we’ve largely vaccinated the entire global population. And so, you know, although, there’s a lot of work on testing, a lot of work on drugs we’re involved with, and trying to achieve that ambitious goal, which has never been done for the vaccine, that rises to the top of the list.”] 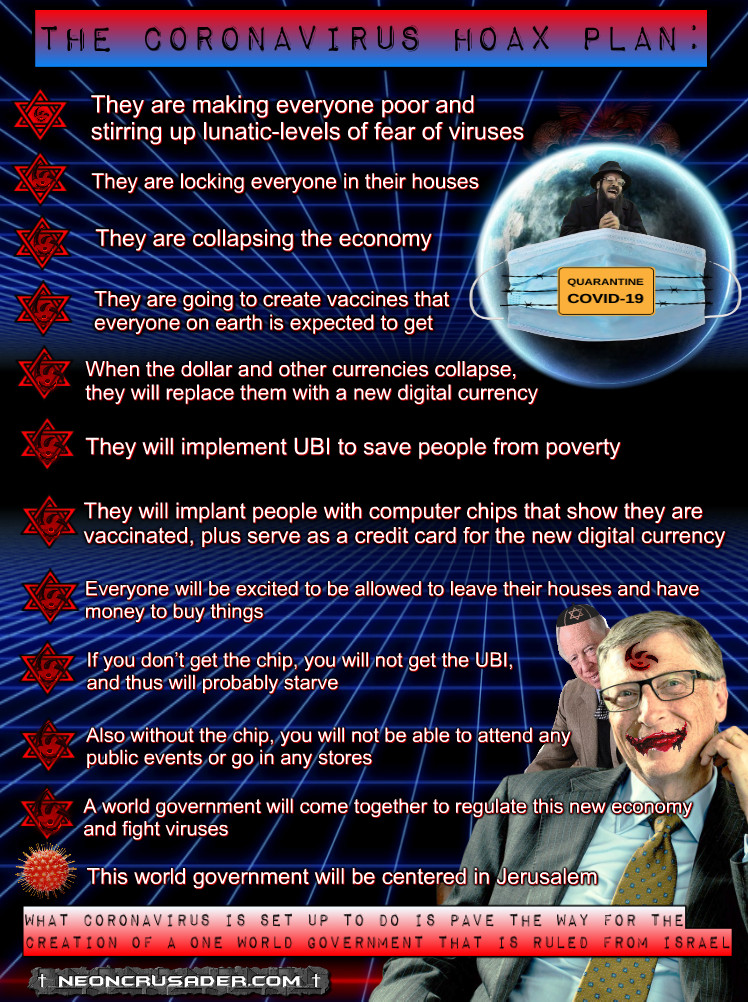 Would you buy a used car from this geek?

He couldn’t even get his Microsoft operating systems running right until decades of trying to patch them up.

And you’re gonna let him prick your wrist and steep your veins with his bar-coded vaccines?

You see, MIT—funded by Bill Gates—created nano-particled microneedles that carry the vaccine in a sugar-like base.

Once dissolved, a “Quantum Dot Marker” with a pre-printed dye that acts like a “bar code” is fixed invisibly under your skin.

The dye not only contains a marker of who you are, but the specific VAX injection, and the date of your ‘immunization.’

With your certificate implanted, the “barcode” stores the data—ON YOUR PERSON—holding deep and secure your social credit score.

It’s a BOGO with a LOGO.

You get your own personal barcode infixed within your skin…

…Plus the bonus of all your data on tap for infrared cameras and smart phone apps that mandated experts and officials will oversee and manage.

You won’t take the vaccine, you say?

Then Pandemic Number Two is on its way. [Clip]

[”What else are we not listening to that we need to take action on now?” “Well, the, the idea of a bioterrorist attack is kind of the nightmare scenario because there’s a pathogen with a high death rate would be picked. The good news is…” “Ok,” “I’m not trying to depress you. It’s tough enough, right now…” “Too late!” “But…” “Too late!” “…Most of the work we’re going to do to be ready for Pandemic Two, (I call this Pandemic One), most of the work we’ll do be ready for that, are also the things we need to do to minimize the threat of bioterrorism.”]

What does this goyisha shill know anyways?

I mean, he’s prepping for ‘Pandemic Number Two’ which bears the threat of “bio-terrorism.”

A bunch of towel heads brewing up a germ laden stew in some cave in Afghanistan?

Or by the same ones who did 9/11—The Israeli Mossad—the only ones who could pull off global false flags, with a little help from its moles in the US Pentagon.

All over your TV screen will be Israelis disguised as germ-bearing Ay-rabs.

The Jew-owned media will strut out Blitzer, Berman, Bash, who will serve up ‘bio-terror’ pics on shish kabob sticks.

And don’t forget Susan Wojcicki, the ‘Censorship Commissar’ of JewTube.

But she’ll spread her legs wide for Mister Gates who holds a syringe with a bar-coded dye soaked deep and impregnated within.
–
+BN off the cuff

Not that he’s one of them, he’s just a useful goy with billions of dollars to throw their way.

Controlling the population is Jewry’s larger agenda and Gates fits the bill.

His vaccine, you see, contains a “barcode,” and a “barcode” is a commercial ID, just like a bunch of bananas.

It fits right in since Jews are the merchants of the world and can reduce the goys to a “bunch of bananas” by branding them with a “barcode.”

Now with the lockdowns depriving the goys of any personal initiative by wiping out their small businesses, the Jews now have a wider labor market than they ever had before.

They can employ heaps of out-of-work goys clamoring for the same jobs at the lowest possible rate.

Costcos will pop up everywhere.

I mean, you could even be a manager, too, at $30 thou a year plus a few bennies if you’re lucky.

This is Jewish Marketing 101.

At the right psychological moment—and Jews excels in this field—the goys will be seduced through false flag “bio terror” attacks into taking the “barcoded” vaccine.

You don’t have to take it if you think like a Jew.

Don’t you know there are tons of Jewish doctors who will cover for their own?

…It can cover a multitude of syringes.

You might think the annexation of Palestine is unrelated to coronavirus. Of course, it is not.